Deceased (Alive in another world)

Gorone Negoro is one of the main characters of Basilisk ~Ōka Ninpō Chō~. Negoro acts as an adoptive father to the Kouga children, as well as a ninjutsu teacher. In the anime he is unable to move his legs and is constantly in a wheelchair as a result. He seems to be skilled in inventing and refining weaponry, as he designed Koura's armor and modified Hachisu's gun several times. In the manga he displays great proficiency with accupuncture through which he is able to attain a more muscular "Asura" physique. 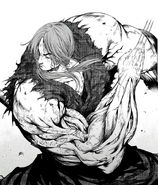 Gorone in his muscular form.
Add a photo to this gallery
Retrieved from "https://basilisk.fandom.com/wiki/Gorone_Negoro?oldid=6688"
Community content is available under CC-BY-SA unless otherwise noted.