Hōetsu is one of the Five Flowers of Iga at the beginning of the Ōka Ninja Scroll. His ability allows him to control vines that he uses to erect defensive barriers and ensnare enemies. In the anime, Hōetsu is defeated by Itaru Yasha who lures him into looking upon her mirror that shows one's destiny driving him to jump from a clifftop to his death in horror. In the manga, Hōetsu is killed by a monstrosity created by Neiri Chiou. 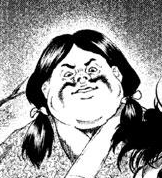 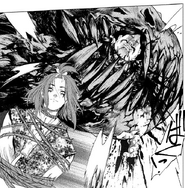 Add a photo to this gallery
Retrieved from "https://basilisk.fandom.com/wiki/H%C5%8Detsu_Tsuta?oldid=6667"
Community content is available under CC-BY-SA unless otherwise noted.