Deceased (Alive in another world)

A strong young male ninja who uses body armor to bolster his hand-to-hand technique. Shikibu displays colossal brute force on account of an unfortunate condition. Since he was born, his muscles constantly grew, threatening his very life as his skin could not restrain his muscle's expansion. In order to survive in his youth, Buddhist monks wrapped him in a suit of bandages, giving him the appearance of a mummy. Later he changed the bandages for armor designed by Gorone Negoro that keeps constant pressure on his body to inhibit his expansion.

In the manga, Shikibu requires no armor and grows to far larger proportions than his anime counterpart. His skin is shown to be hard enough to break swords. 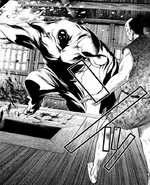 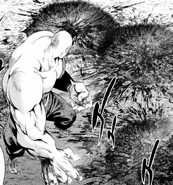 The aftermath of Shikibu's strikes.

Hachisu and Shikibu.
Add a photo to this gallery

Retrieved from "https://basilisk.fandom.com/wiki/Shikibu_K%C5%8Dra?oldid=6681"
Community content is available under CC-BY-SA unless otherwise noted.